On a wet dreary Sunday afternoon we decided to set off in search of the obscure UFO houses that reside on the east coast of Taiwan.

These houses used to be part of a large-scale holiday resort project spanning the west and east coast of Taipei. Both plans were never finished, and both resorts were abandoned and left to rot.

The backstory of the project is just as interesting as it’s design. Many believe that the project was halted because of unexplained suicides of construction workers that worked on the site, and if that wasn’t creepy enough, they found they had also stumbled upon several skeletons of Dutch soldiers buried on the land. Even if the case of abandonment is more likely due to the decline in US tourism, you can’t deny the air of creepiness when you see these looming, strangely colorful homes on a foggy day.

The main resort, Sanzhi Pod City, was the first to be demolished in 2008. The houses there were multi-floored, but the decay was too dangerous. Despite plans to revitalize the area, construction was just not possible and the government demolished the site. The photo above was taken a month before demolition and showed the larger pod houses along with several pools.

Wanli is now the only place left where we can still visit these futuro-styled homes.

These homes first became popular in the 70’s. The benefits being that they were made out of plastic and transportable. But post-construction, designers and constructors found the rising prices in plastic unreasonable for building, and lacking in strength. When it comes to Taiwan’s reoccurring earthquakes, many believed these houses would not be able to support people living in them. Now they stand locked up with only mosquitoes as permanent residents.

While most of the houses are chained up, you can still peek through the windows to see the retro styled kitchen, bathroom, and bedroom. Outside, Tim Burton-esque trees grew freely in the area. One of the houses was so overgrown we had to crawl under the branches that intertwined across the stairs to reach the front door. (See picture below) 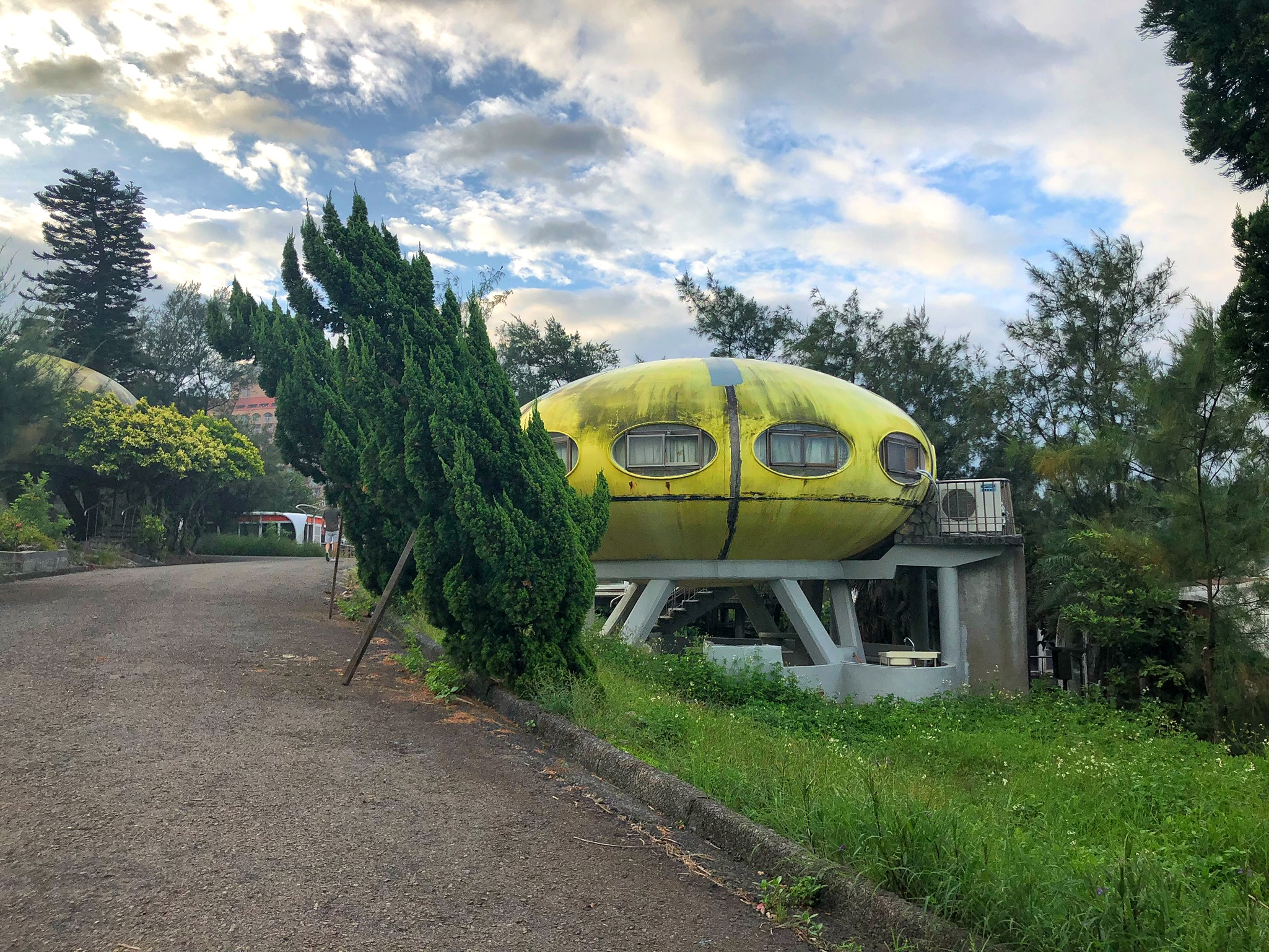 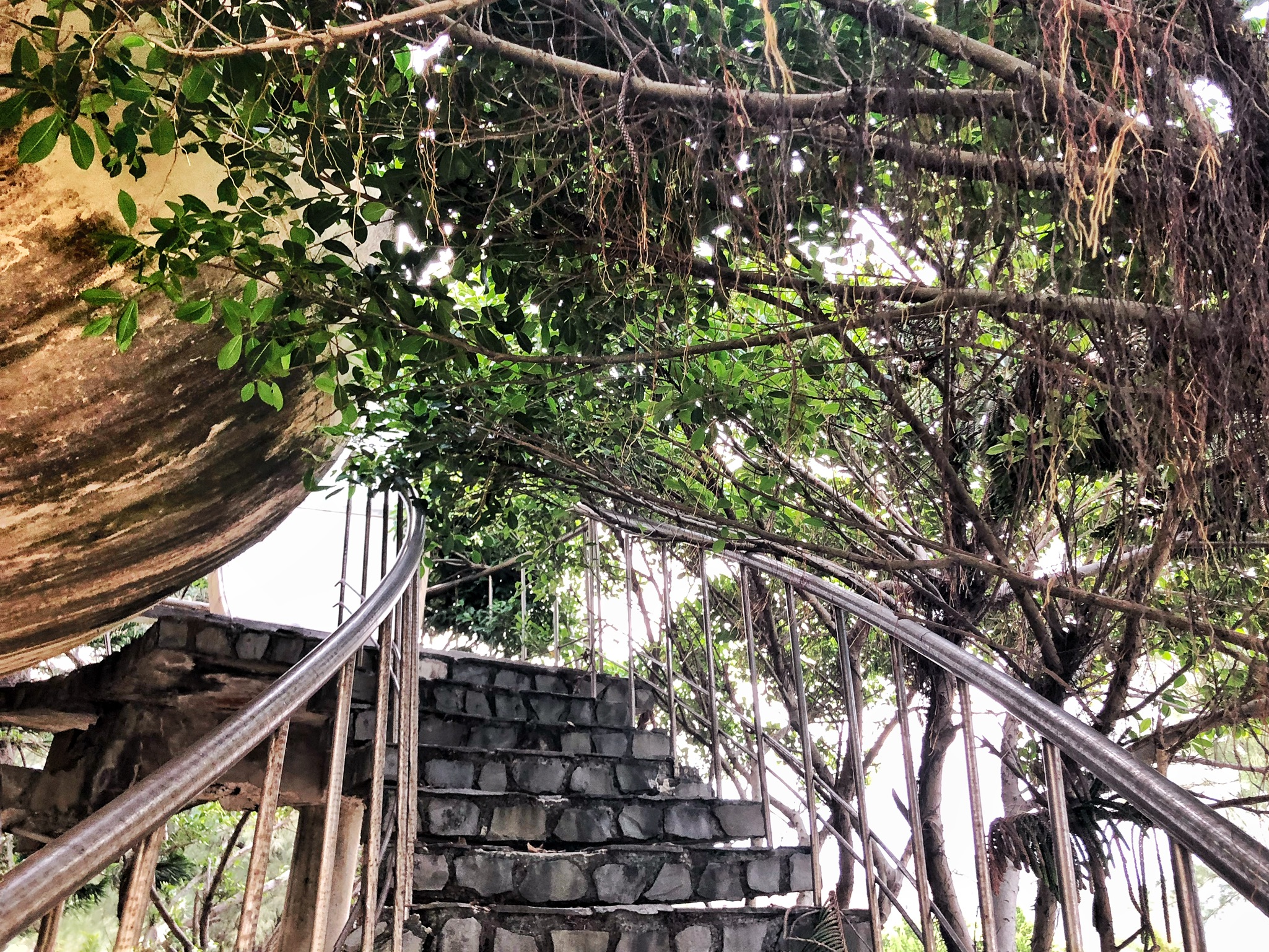 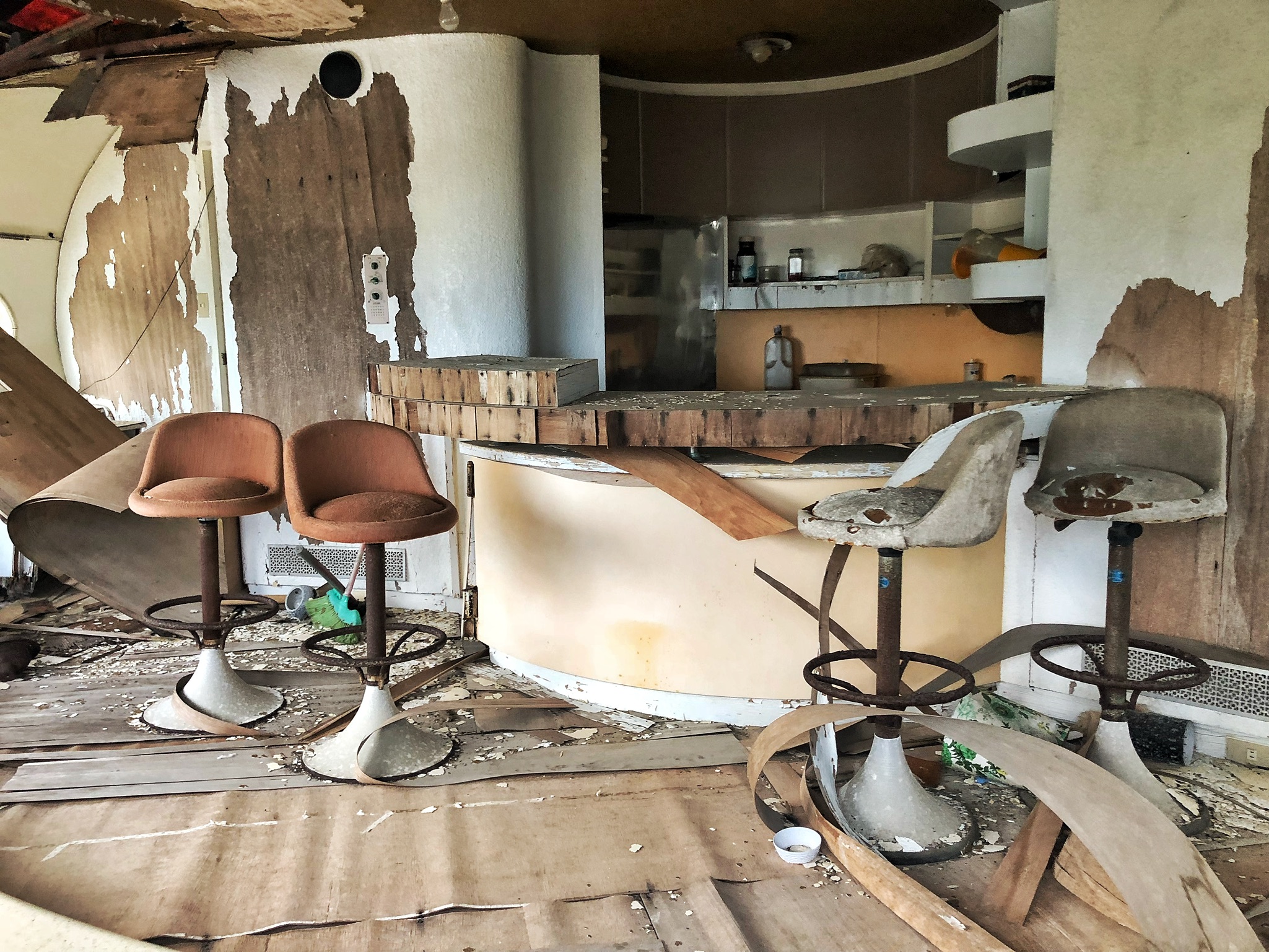 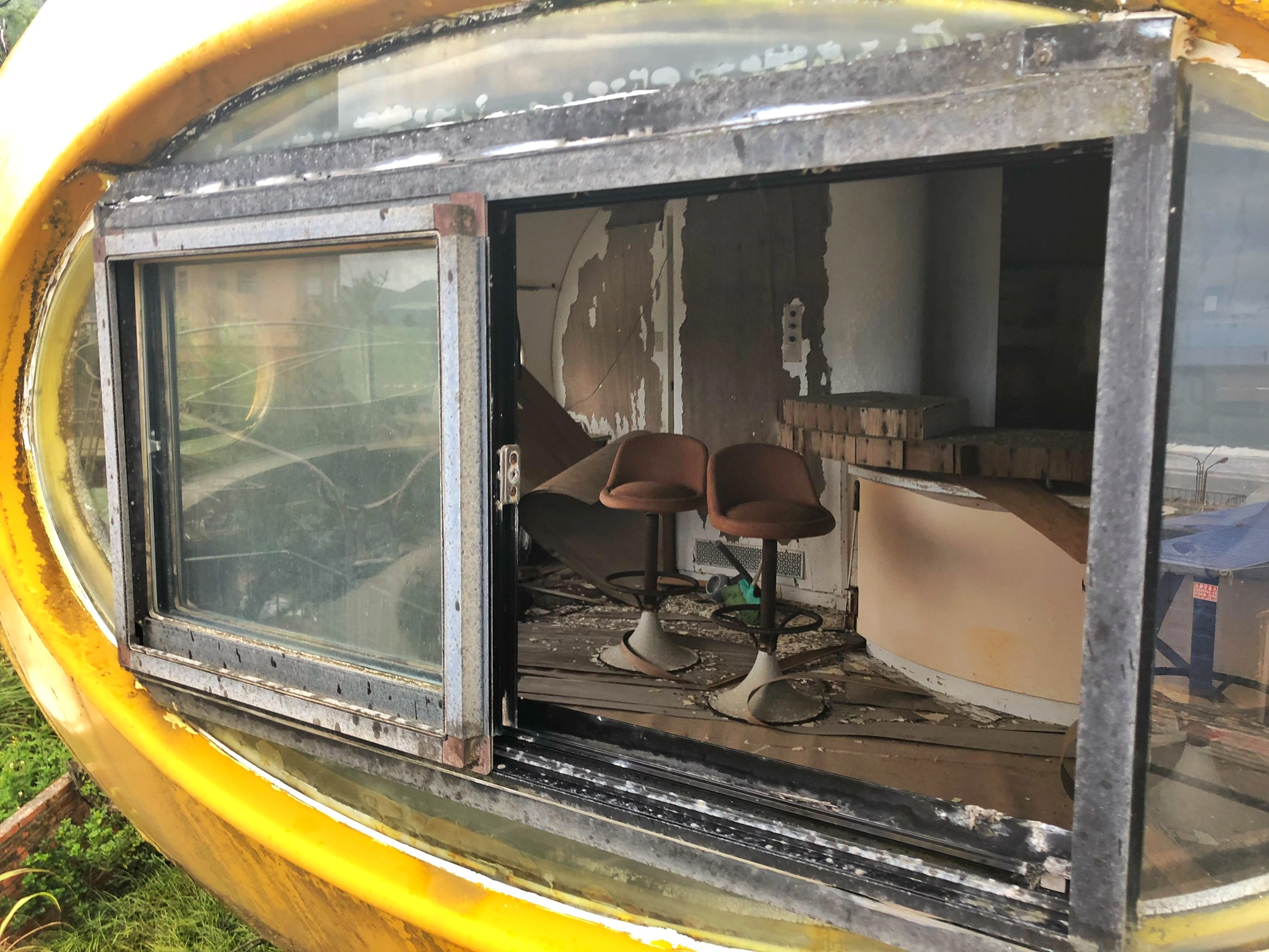 A lot of the homes are run down, lots of dust, lots of broken glass. In one of the houses, the flooring had fallen through. Explore at your own risk. 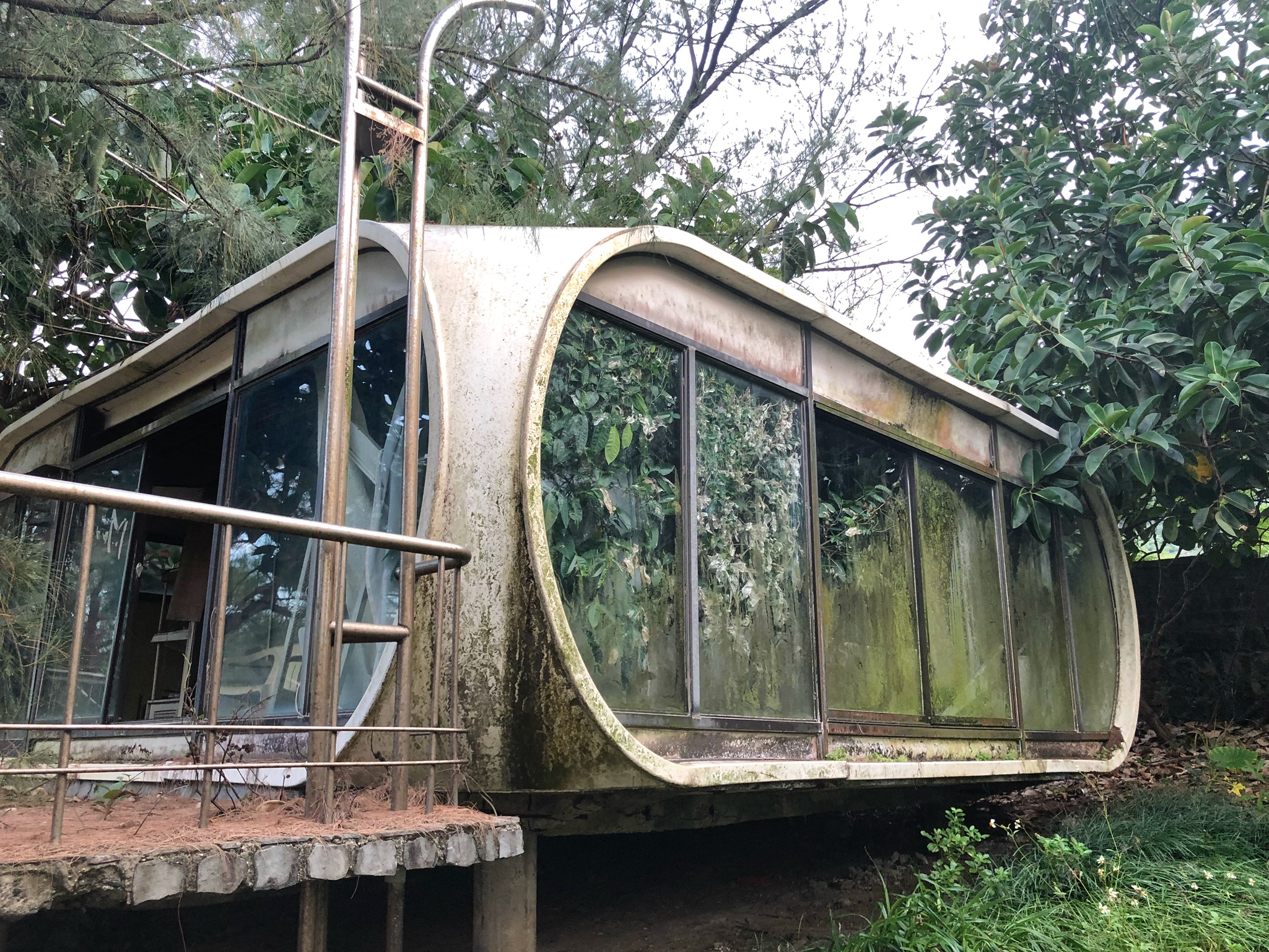 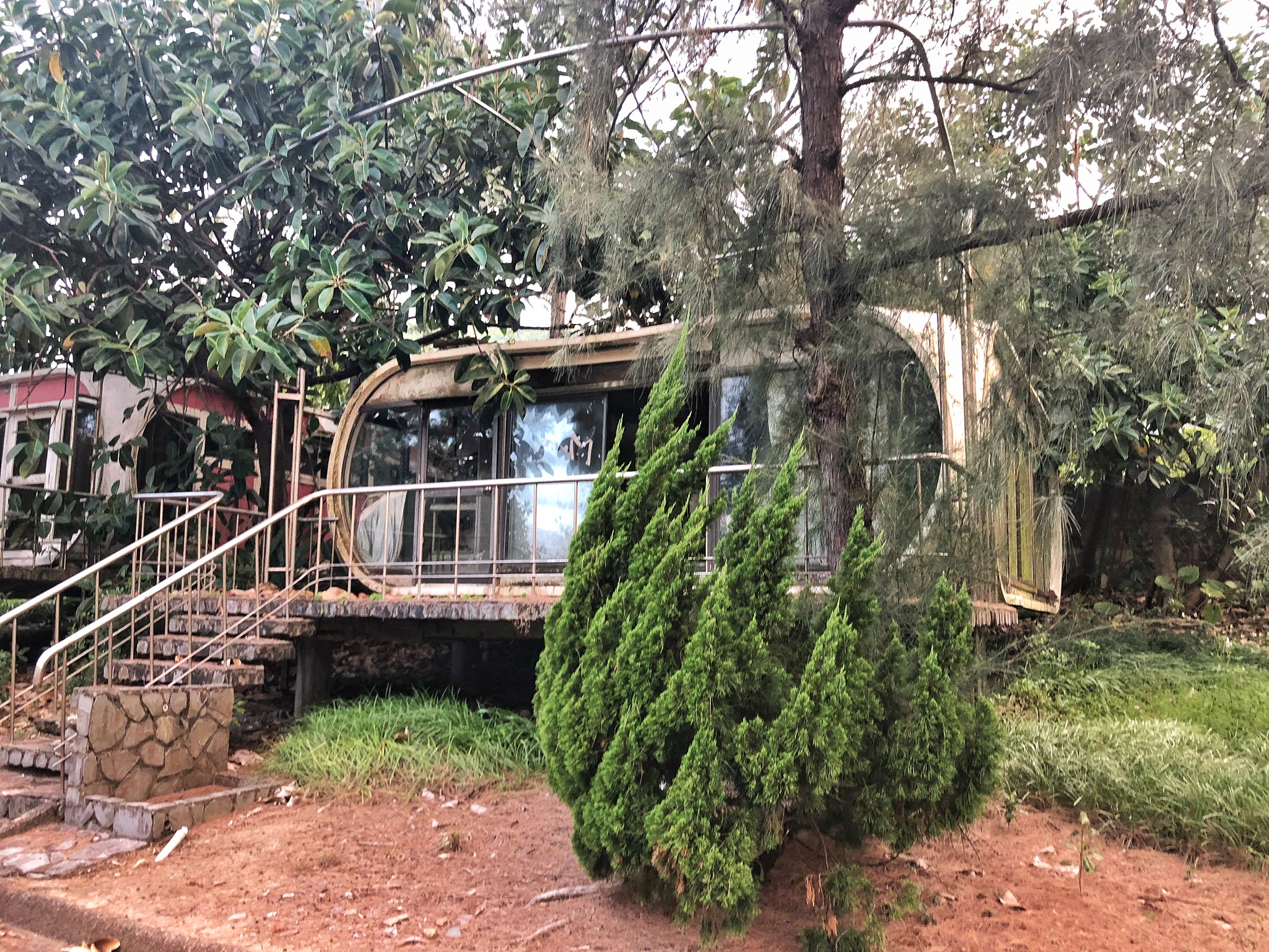 In the same area as the UFO houses were several Venturo styled homes (white pod-like homes with floor to ceiling windows like the ones in the photos above). Built with the same idea in mind (cheap plastic, easily transportable) it was also subjected to the same abandonment when the money ran dry. Several of these homes looked briefly inhabited, while the rest were collapsed or overgrown with plants. I loved the style of these homes especially as a couple were placed on a hill top overlooking the ocean. If these were ever able to be restored they would make a beautiful getaway, but for now, they’re an abandoned building-phile’s dream come true.